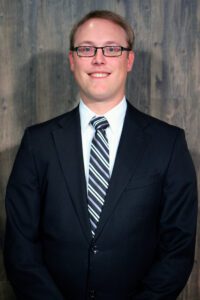 ASSISTANT GENERAL MANAGER & BROADCASTER
USA HOCKEY CERTIFICATION:
YEARS WITH UTAH: 8
ACCOMPLISHMENTS:
CHAMPIONSHIPS:
NATIONAL TOURNAMENT APPEARANCES:
Matt joined the front office in September of 2015 and has been the “Voice of Utah Hockey” since 2012. Matt is a former player as well, playing for the Utes from 2007-2010.

Now in his eighth season serving as the play-by-play announcer for the Utes, Matt has called several key games for the Utes, including their three Wasatch Cup titles, two of their PAC-8 Championships, and several playoff appearances at both the Regional and National level.